Remove the fat layer from lamb leg before cubing the meat. Season the meat cubes with salt and pepper and dredge with flour; shake off any excess.

Melt 1 tablespoon of butter and one tablespoon of oil in a heavy Dutch oven like “Le Creuset” over medium high heat until hot but not smoking. Add the lamb cubes and sauté until well browned on all sides. Work in batches so as not to crowd the meat cubes, or they will steam instead of sauté. Add butter and oil as necessary. Transfer the meat cubes to a separate container and keep warm

Add rest of butter and oil to the Dutch oven and melt over medium to medium high heat. Add the onions and cook, stirring occasionally until browned, about 15 minutes. Towards the end of the cooking time add the garlic and paprika. It is important to brown the onions (and the meat) evenly to give the stew its deep brown color. The trick is to stir the onions just enough to avoid burning, but not so often as to interrupt the browning process.
Deglaze the pot with the beer, scraping with a wooden spoon to loosen any brown bits and bring to a boil. Add the meat to the pot, stir in the thyme, bay leaves, mustard, sugar or jelly and vinegar.

The goulash tastes even better reheated and also freezes well. 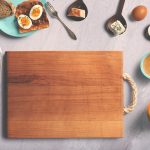 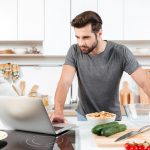