Conceited mushrooms stuffed mostly with themselves By thesmartcookiecook.comA recipe of Conceited mushrooms stuffed mostly with themselves. Click here to view.
4.9175

Even if you are a person known to contemplate that sort of thing, youve probably never given a great deal of thought to the relative beauty of mushrooms. That calls for a real aesthete! I certainly had never ever considered it until a few months ago when Vikki came home from our local Food Emporium (remember when they used to call them supermarkets or even grocery stores?) one day with a dozen mushrooms that were absolutely gorgeous. These were not your run-of-the-mill brownish buttons sealed with plastic wrap in light blue egg carton-type box. These were two- or three-inch diameter snowy specimens that were to mushrooms what Garbo was to starlets. Certainly not to be sauteed, chopped into spaghetti sauce, or even sliced into a raw salad. These were created to be stuffed and served whole in all their glory. Simple enough, but with what?

Dont bother checking all your favorite cookbooks: one group calls for ingredients I never seem to have readily available, such as snails, fresh clams or oysters, goose-liver, or pickled pigs feet. The other group calls for a combination of not less than nine various herbs and cheeses, involving at least two exotic kitchen appliances, and requires a minimum three cooking processes always including the use of a double boiler, which has never been one of my favorite appliances. Forget all that trouble and concentrate on those luscious mushrooms that demanded stuffing in the first place.… Jim Huff

Wash and dry the mushrooms, snapping the stems out of the caps. Mix the bread crumbs, thyme, parsley, mushrooms, and melted butter in a small bowl. Stuff this mixture into the caps. Place 2 inches under the broiler until heated through. Serve 3 to each guest as hors doeuvres. 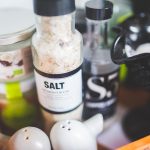