Trim bread to fit into each dish. Beat eggs, half & half, and vanilla together. Pour equal amounts over bread and refrigerate at least 1 hour to allow it to soak in (may be prepared the night before).

Bake at 375 degrees for 30 minutes until the top is lightly browned. Sprinkle with powdered sugar. 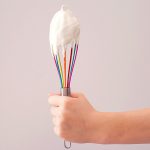