By thesmartcookiecook.comA recipe of Pasta squares filled with meat and spinach in lemongrass stock recipe. Click here to view.
4.9194
﻿

Whisk the eggs with oil and salt. Stir in the flour and knead until the dough is well combined and pliable. Wrap into cling film and cool for an hour.

Peel and chop the onion. Sauté the onion and the bacon in a pan until golden. In a bowl, combine onion and bacon with the minced meat, spinach, egg, breadcrumbs and parsley. Season with salt, pepper and nutmeg.

Quarter the dough. Roll out on a floured surface as long rectangles. Spoon on one half of the long side small heaps of the filling, leaving enough distance to separate the squares later on. Brush some water on the dough around the heaps. Fold over the other half of the dough and press firmly onto the space between the heaps. Cut off the stuffed squares. Repeat with the remaining dough and stuffing until all is used up.

For the bonion butter, dice the onion and sauté in butter until golden.

In a large saucepan, heat the stock. Pound the lemon grass stalks until soft and flexible. Bend each to a knot and place into the stock. Cook over low heat for approximately 10 minutes. Add the pasta squares and simmer until they rise to the surface. Leave for another 2 minutes in the stock, then take out with a slotted spoon, transfer to the onion butter and toss gently.

Place some pasta squares into each soup plate and pour over a ladle of the lemongrass stock. Serve sprinkled with chives. How to Make Greek Yogurt and Yogurt Cheese 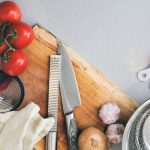