A soy sauce and pineapple marinated pork tenderloin stuffed with dried figs that have been soaked in Four Roses Bourbon, then chopped, mixed with finely ground pork to create a smooth and silky pâté. The stuffed tenderloin is then pan seared and served with a hickory smoked potato and sausage hash, complimenting the complex flavors of Four Roses Bourbon. Part of the Southern Gaming Casino Cook-off presented by Four Roses Bourbon.

1. After figs’ stems are removed and cut, cover with 6 ounces of Four Roses(R) bourbon and add 2 tablespoons honey. Wrap tightly with plastic wrap and place in refrigerator. Gently roll the marinade around a few times while in the refrigerator. Marinate for 4 1/2 hours, minimum.

2. Clean all fat and silver skin from tenderloins, remove the head and the last 2 inches of the tail; this is called blocking a tenderloin. Keep all usable trim for use in the fig stuffing. After cleaning and blocking both tenderloins, cut them in half.

4. Place all pork in marinade cover tightly with plastic wrap and return to the refrigerator for 4 1/2 hours. Gently roll the marinade around the bowl once an hour while in the refrigerator.

5. While the pork is chilling in the refrigerator peel, wash, and large dice the baking potatoes. Cut them about ¼ inch square. Set pot on to boil.

6. While waiting for the water to boil: in a bowl large enough to hold all diced potatoes and still have room to cover with ice and water, set up an ice bath to quickly cool the potatoes to keep them from over cooking. Fill this bowl a quarter of the way with ice cubes and set it close to the sink where the cooked potatoes will be drained.

7. Next, lightly boil all the diced potatoes until al dente or just fork tender; under cooked is better than over, the potatoes should keep their shape not to become soft. Once the potatoes reach this point remove them from the stove and quickly drain. Once they are drained, put them in the bowl of ice prepared earlier, then add just enough water to cover the potatoes. Let them cool in this ice bath until cooled throughout, then drain completely.

8. While potatoes are cooling and draining, place a large sauté pan or skillet over medium heat and brown and crumble the breakfast sausage. Once browned, drain any excess grease.

9. Take half of the cooked diced potatoes and place them in a low temperature, slow-rolling smoker burning hickory chips. Leave them to smoke until the color of the potatoes slightly darken; this should take about 5-10 minutes. The longer the potatoes are left in the smoker, the stronger the smoke flavor will be.

10. Then mix all potatoes (smoked and not smoked) with the cooked, drained sausage, white pepper, Cajun seasoning, and melted butter. Add salt and pepper to taste. The potatoes can be stored in the refrigerator and later re-heated in the oven or in a sauté pan or skillet when time to serve with the stuffed pork tenderloin.

11. Fig Stuffing: Remove the pork trimmings from the marinade. Roughly chop pork trimmings into small pieces and place in a food processor with the chopped garlic and figs that have been removed from the bourbon and drained.

12. Spin in the food processor on high until smooth, then add cream of tartar. Pulse to mix, then spin on medium speed, slowly adding egg whites until all eggs are thoroughly blended. Refrigerate stuffing for 1 ½ hours to set up.

13. Raspberry Coulis: Puree all ingredients in a food processor on high, then strain through a chinois to remove seeds.

14. Remove the blocked tenderloins from the marinade and, using a clean sharpening steel, starting from the end where cut in half, firmly push the steel into the center of the loin slowly and push it in the length of the tenderloin half, stopping short of coming out the other end. Remove the steel and repeat the same process on the remaining three half loins.

16. In a sauté pan or skillet over medium to high heat, heat the extra virgin olive oil. Once a light smoke rises from the oil, lay the tenderloins in the oil gently to sear and lightly caramelize them, rotating them to evenly brown all sides.

17. Finish the tenderloins in a 325° F oven for 15-20 minutes or an internal temperature of 165°F is reached. Remove from the oven and allow them to rest for 3-5 minutes before slicing and revealing the sweet fig and bourbon eye in the center of the loin.

18. Heat the smoked potato hash and plate the stuffed tenderloin with a drizzle of bourbon raspberry coulis garnish with a sprig of rosemary and potato Gaufrettes. 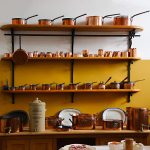